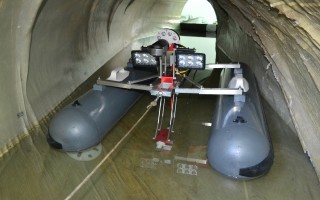 Training on the operation of a pipe profiling sonar was organized in the Technological Center for New Developments in Trenchless Technologies by AM Industrial, the manufacturer of the sonar equipment. This type of equipment allows the inspection of operating pipelines without draining the fluid and interrupting the operation of the facility. The sonar itself, mounted on a float, logs unevenness, obstacles, deviations and damaged pipeline integrity with great accuracy, and provides detailed information about the position and parameters of the objects. A pipe with diameter of 1400 mm was specially prepared for the training; it was filled with water and various obstacles were placed at its bottom. The whole team of trainees studied the pipe profiling in theory and in practice, and special attention was paid to reading sonar data. Apart from a sonar, the equipment also has a CCTV camera, which provides information about the above-water part of the pipeline. After testing the system in the Technological Center, the practical training continued in real conditions – at an open duct in WWTP Ovoshtnik.